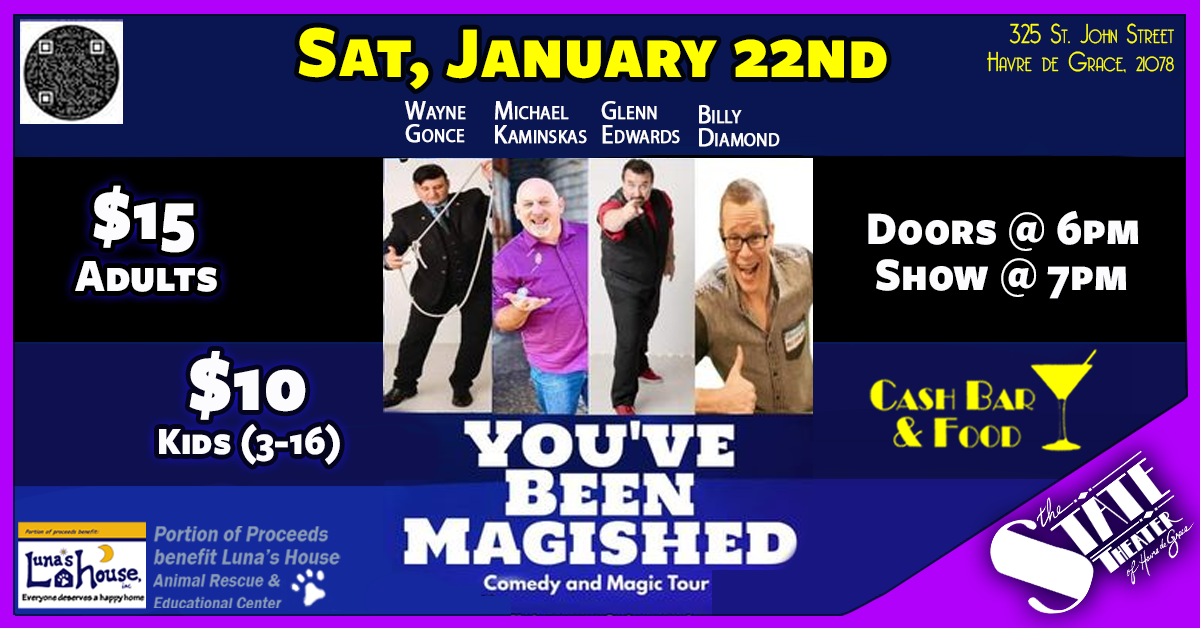 The State Theater of Havre de Grace is thrilled to present another great night of special entertainment with “You’ve Been Magished – Comedy & Magic Show!”

RECOMMENDED AUDIENCE: All ages. Attendees under 18 must be accompanied by an adult at all times.

Wayne began studying the art of magic at the age of 9. By the age 13 Wayne started training and learning from Legendary Magician Denny Haney who was the owner of the The Denny & Lee Magic Studio in Baltimore Maryland, Denny toured the world with his own show for 35 years, and is highly respected by David Copperfield, Lance Burton, Penn & Teller and many more. Under Denny’s tutelage Wayne began performing for kids birthday parties, middle schools, high schools & public libraries. While working with Denny Wayne met Scott Alexander & Puck who he quickly became good friends with and started learning from them. With the guidance and mentorship from Denny Haney, Scott Alexander & Puck Wayne now performs his comedy magic show at comedy clubs, theaters and events across the country. Not only is Wayne a full time performing Magician he is also an Actor who has been seen on ABC’S The Kids are Alright, CBS’S NCIS LA & many more.

GLENN EDWARDS
Raised in Maryland, Glenn Edwards started performing magic in the late 80s. After a brief absence from the magic world, Glenn has returned to performing magic and now performs locally. With emphasis on entertaining the elderly, he uses his magic to help promote physical and mental health. Glenn now brings his show to the stage by performing at birthday parties, schools, public libraries, churches and theaters across the country.