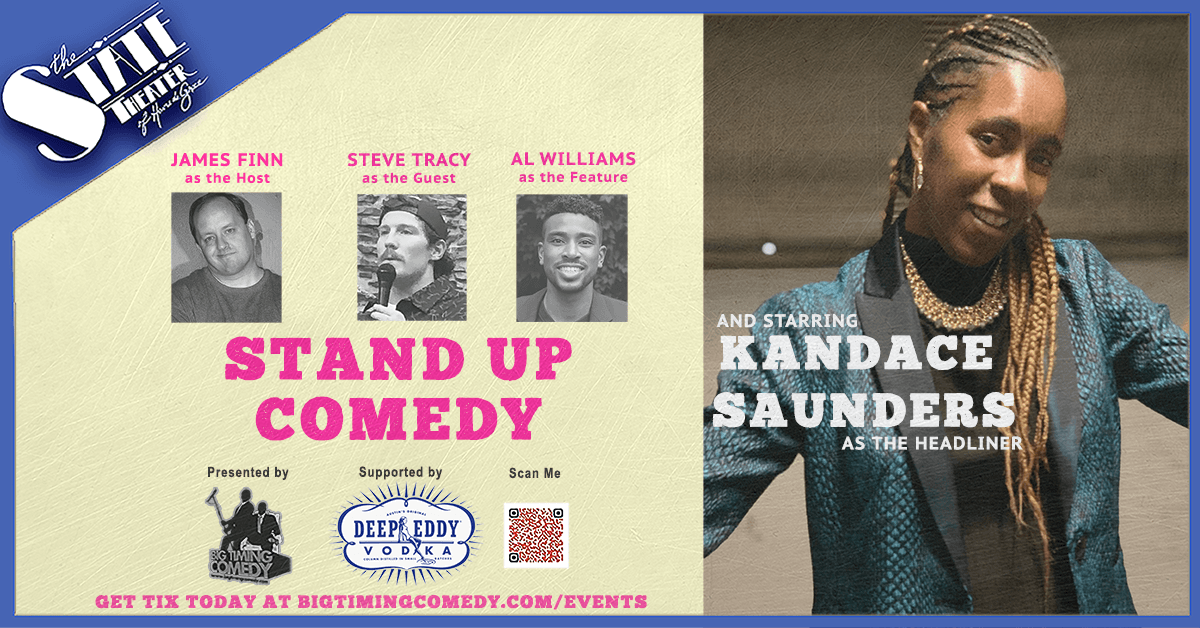 Enjoy a night out with your beau and or a friends to enjoy some laughs with good old fashion comedy, beverages, and a cozy theater in downtown Havre de Grace MD!

Follow our PODCAST Paco’s Got Balls feat. Wendi and become a Patron to listen to bonus content! You’ll be thoroughly entertained!
www.bigtimingcomedy.com/podcast

MUST BE 18+
Tickets are for access to the comedy show and sales are final!!

HEADLINING: KANDACE SAUNDERS
For a taste check out TBD here!

Kandace Saunders made her comedic debut in 2006 during a comedy competition at the DC Improv. Although, she didn’t win, she didn’t get booed, and people laughed. So for Kandace, that was enough to pursue a career in standup comedy. Kandace’s sarcasm, and quick wit, coupled with her ability to turn life into “extremely laughable situations”, has allowed her to become one of today’s fastest rising comedians. You can catch Kandace at comedy clubs and colleges across the country.
IG/Twitter @kandydoesntkare
FB Kandace Saunders or kandydoesntkare
www.kandacesaunders.com

GUEST: STEVE TRACY
Steve Tracy is a standup comedian that has honed his craft working on the Baltimore, Maryland comedy scene. His time as a comic in Charm City has enabled Steve to use his sharp mind and quick wit to craft well-conceived, hilarious jokes, as well as develop his own unique style of interacting with audiences. Steve’s material reflects his experience with relationships, family, friends, and the world around us. Steve has performed at Magooby’s Joke House (Baltimore), DC Comedy Loft, Wiley’s Comedy Club (Dayton), Harrisburg Comedy Zone (PA), The Grisly Pear (NYC) and The PIT Theater (NYC). Steve is the co-host of the Two Joke Minimum Podcast, currently in season 4, which can be heard weekly on Spotify, Apple Podcasts, iHeart Radio, Amazon Music.
Social media: Steve Tracy on Facebook
Fakesteve3 on Instagram
twojokeminimumpodcast.com

HOST: JAMES FINN
With over a decade of experience, James Finn has been wowing audiences up and down the east coast with his engaging brand of observational and self deprecating comedy. A favorite in the Baltimore area, he has been seen at Magooby’s Joke House, Church of Satire comedy club and has appeared at the Baltimore Comedy Festival and Annapolis Fringe Fest.
Socials – @jamesfinnstagram – Instagram
@heyitsjamesfinn- Twitter, TwitchBD